As many of you are aware, The DALE Companies are involved in numerous projects throughout the City of Philadelphia. Several of these projects have been in low income neighborhoods that have experienced disinvestment and decline, but are now in transition and working toward redevelopment.

The DALE Companies believe that when working in these communities it is vitally important to be more than just a contractor. We must be a good corporate citizen as well. That is why we go above and beyond and strive to maximize local community hiring, be it both residents and local contractors, s

o the community gets the maximum benefit from the project. DALE has always been a leader in not only achieving the required goals of community hiring and participation, but in surpassing them.

DALE Habitat for Humanity effort was a resounding success. We won the trophy for completing our houses before the competition and we received a commemorative plaque for participation. 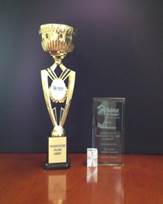 DALE and Habitat for Humanity

You must be logged in to leave a reply.